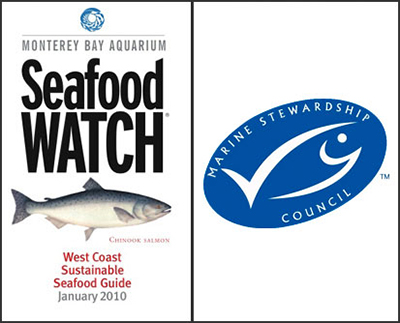 The sustainable seafood movement started in the 1990’s and in 1996, the Marine Stewardship Council (MSC) implemented the first certification program. Shortly after, the Monterey Bay Aquarium developed a list of sustainable seafood as part of their 1997-1999 “Fishing for Solutions” exhibit. But I didn’t hear the term “sustainable seafood” until around 2009, and once I did, that’s when seafood choices started to get complicated. Back then I didn’t even know what the word “sustainable” even meant. All of a sudden I found myself hearing about destructive fishing practices, illegal fishing, overfishing, bycatch, and seafood fraud while attempting to reference multiple conflicting seafood sustainability ranking guides in an effort to do the right thing for our oceans. It was quite overwhelming to me at first, but it was super interesting as well.

All of a sudden ocean conservation was on everyone’s radar, but unfortunately I noticed the media was reporting mostly doom-and-gloom news about the state of our fisheries and oceans and not many success stories, while environmental groups were telling us a lot more about destructive fishing practices rather than promoting responsible fisheries. Bad news sells I guess, but instead of focusing on all of the negatives I was hearing about fishing and what not eat, I was hungry to discover and learn more about responsible fisheries as well in an attempt to wrap my head around the bigger picture so that I could better understand this complex issue. As complicated as seafood choices were starting to seem to me, I wanted to make seafood choices simple again and I didn’t want to have to rely on anyone else to make my choices for me.

Learning about what seafood was considered “sustainable” or not back then was so interesting to me that seafood choices and fisheries research in general ended up turning into an ongoing 6-year “research project” that I am still obsessed with in my spare time to this day. I believe that the introduction of the term “sustainable seafood” is responsible for putting responsible seafood choices on people’s radar for the first time and it also changed my life for the better 6 years ago. But for the last 2 years or so I’ve grown to despise the word “sustainable” to the point that I even cringe every time I hear someone say it, but why?

It’s because I believe the word “sustainable” is now ubiquitous and has completely lost its meaning over the years. Now the word “sustainable” has become a buzz word that’s often used as a marketing tool, but one person or company’s definition of what “sustainable” means to them may be very different than what sustainable means to scientists, or to you. Knowledge is power and when we limit ourselves to only buy what someone else says is “sustainable seafood” when we don’t even know what that term really means anymore, it puts us in a position to where we have no power at all and are forced to rely on seafood guides or eco-labels to tell us what is sustainable or not rather than us being empowered to make well-informed decisions on our own.

That being said, I also do not think it is wise to live and die by seafood guides when it comes to seafood choices. Today there are dozens of seafood advice websites, but like I said before, they often offer conflicting information. Why the conflicting information? A recent article written by Ray Hilborn, professor of aquatic and fishery sciences at the University of Washington states, “Providing seafood advice is now a big business, both with direct payment from retailers to those giving advice, and by fundraising campaigns to “save the oceans” that fail to acknowledge that the existing U.S. fisheries management system provides for sustainability.” With all of the information available at FishWatch.gov, I’d go as far to say that I would be happy to see seafood advice programs such as Seafood Watch go away for good.

The introduction of the general term “sustainable seafood” may have inspired a new generation of ocean advocates years ago to make more responsible choices, but it seems to have run it’s course and worn out it’s welcome in my opinion. Trying to identify what type of seafood or what gear type is considered “sustainable” was a good starting point for us because it opened our eyes to the issue, but relying solely on the “sustainability” mindset alone as we move forward can be very limiting and often counterproductive in terms of effective ocean conservation. I think it’s unrealistic for us to believe that responsible seafood choices can be defined by a word, a term or a label. The “sustainable seafood” movement is over 20 years old and now I think its time for us to take our seafood choices to the next level.

If we really want to take ocean conservation to the next level, I think we need to stop limiting ourselves by only focusing on what species and gear types that people tell us are “sustainable,” and start to use our own brains by thinking more in terms of identifying and purchasing seafood that we know is responsibly sourced from nations with responsible fisheries management.

By taking a step back, looking at the bigger picture, focusing on what facts I did know and reevaluating what was important to me, all of a sudden seafood choices started to seem simple again. I am not going to try to tell you what to think or do, but for me personally, I arrived at the conclusion that buying seafood that is harvested in the U.S. and supporting U.S. fisheries is the most responsible and effective action we can take to support responsible fisheries, healthy oceans and coastal communities.

One fact that has always been a huge concern of mine is that up to 90% of the seafood consumed in the U.S is imported. This is up from 67% just 12 years ago creating an annual trade deficit of more than $10.4 billion, which is second only to oil in the natural resources category. What also scares me is that only about 2% of imported seafood is inspected at all, only 1% is inspected for mislabeling, and only .1% is tested for banned drug residues.

It doesn’t take much research to realize that some foreign fisheries are either poorly managed or not managed at all. We hear a lot about illegal, unreported, and unregulated (IUU) fishing, which is a big problem in other countries but not here in the U.S. We hear that 33% of seafood tested in American restaurants is mislabeled, but our domestic fisheries follow seafood-labeling rules. We hear a lot about overfishing, but the U.S has essentially eliminated overfishing, with only 9% of stocks now fished at rates higher than would produce long-term maximum yield.

There are a lot of concerns surrounding what little we know about foreign fisheries, but we do know that the U.S has one of the lowest levels of overfished stocks and 40 years of evidence (the Magnuson-Stevens Act) to back it up. It seems obvious to me that supporting U.S. fisheries is an easy way to simplify responsible seafood choices, so why aren’t NGOs promoting this message?

According to Ray Hilborn, “Some NGOs now gain so much revenue from companies that sell seafood and concerned citizens, that they simply cannot admit the U.S. success.” When we ignore the success of responsible U.S. fisheries management while imports continue to increase, we are essentially rewarding the “bad guys” while punishing the “good guys.” Meanwhile, the number of commercial fishermen in California has decreased over 75% in the last 30 years.

I’ve noticed that other folks are starting to arrive at the same conclusion that I have, and fortunately it is becoming easier and easier for us to buy U.S. seafood. The first community supported fishery (CSF) was started in Port Clyde, Maine, in 2007 but today there are 187 locations in North America. If you want delicious canned albacore tuna that is caught pole-and-line one at a time right here in the U.S. all you have to do is visit your local Whole Foods or you can simply order it online. Even Costco offers several U.S. seafood options. No matter where you live it is now easier than ever to buy U.S. seafood, and I sure wish that more folks would.

I finally got around to reading this…nice write up here. It clearly identifies the need to simplify complexities and the importance of making a truly informed decision based on facts. I think some well intended organizations have lost sight of what matters most; disseminating information that makes decisions easier for the end consumer. Nice work.

Thank you for the kind words, Jon. I hope all is well with you.