On February 20, 2014 California Assembly Member Paul Fong introduced legislation (AB 2019) that would outlaw the use of drift gillnet (DGN) gear in California, which is mainly used to target swordfish and sharks. Oceana and the Turtle Island Restoration Network sponsored AB 2019 while claiming that CA gillnets are “curtains of death.” On March 3, 2014 the bill was referred to the California State Assembly Water, Parks and Wildlife Committee (WPWC) who voted down AB 2019 at the first public committee hearing on April 29, 2014.

The WPWC vote to kill AB 2019 at it’s first legislative hurdle came to the surprise of both the proponents and the opponents of AB 2019, mainly because 3 of the WPWC members were also co-authors of the bill including the chair of the Committee, Assembly Member Anthony Rendon. We were all well aware that the chances of this bill not making it through this Committee were slim to none, but it was important that we fought it anyway to show our strong opposition from the start.

The hearing got off to a late start around 3:00p.m. and the room needed to be cleared by 3:30, so things happened quickly. Things started with the bills lead author, Assembly Member Paul Fong giving a brief overview of the bill. That was followed by 2-minute testimony given by key individual proponents of the bill. The main proponents Geoff Shester from Oceana, Jennifer Fearing from HSUS and Terri Shore from the Turtle Island Restoration Network each spoke for about 2 minutes each. After that, the additional individual proponents of the bill walked up to the microphone and stated their name, occupation and position on the bill.

Next there was testimony from the bills main opponents, John Calambokidis from Cascadia Research Collective and DGN fisherman Arthur Lorton. After that, the additional individual opponents of the bill walked up to the microphone and stated their name, occupation and position on the bill.

15 Assembly Members represent the WPWC (5 Republicans and 10 Democrats) and 8 yes votes are needed in order for a bill to make it past the Committee. We knew that all 5 of the Republican WPWC members were opposed to the bill, and that at least 3 of the Democrats (co-authors) supported the bill. That left the decision to the 7 remaining Democrats, most if not all of which were expected to vote yes in our opinion. In the end, 6 WPWC members voted yes on AB 2019, 7 voted no and 2 members did not vote at all (same as a no). So why was this bill so short-lived?

AB 2019 was killed because the bill was flawed from the start. The sponsors of the bill relied heavily on misinformation about the CA DGN fishery. They also shared graphic images with the mass public as well as Assembly Members the day of the hearing of dead marine mammals that had been caught in DGN gear over 10 years ago, and even some images taken from foreign fishing vessels while claiming it was a CA DGN vessel. Nobody enjoys looking at graphic images of dead animals, but thankfully the majority of the WPWC was able to let the truth triumph their emotions and were able to make a level-headed decision based on the facts. So who shared the facts about the CA DGN fishery with the WPWC members and influenced them to vote no on AB 2019?

It took an army. In all, 13 of us made the trip up to Sacramento to lobby Assembly Members and/or to give testimony at the WPWC hearing, which included 10 fishermen (1 of which is a lawyer), 1 marine mammal biologist, 1 lobbyist to coach us, and myself. We divided and conquered as we split up and met personally with Assembly Members and staffers the day before the hearing, with a special focus on the 7 undecided Democrats. I was blown away by how available the staffers were to speak with us and how receptive they were to the information we were sharing. I actually believe they really cared.

But it took more than an army of 13 to defeat this bill. We also created a Facebook page and provided the phone numbers to key Assembly Members asking our followers to light up the phone lines the day before the hearing. Our Facebook page has over 500 followers and at least 33 of them made phone calls that day, maybe more. In addition, creating this Facebook page put us in contact with DGN fishermen that we had no contact with before and a couple of them were able to make it up to Sacramento for the hearing. I have no doubt in my mind that our Facebook page was a critical piece of the puzzle that led to our success in killing AB 2019.

Bycatch was the main hot-button issue that was brought up by the Assembly Members and staffers. It seemed as though there was some confusion about what bycatch actually is. By definition, bycatch as stated in the Magnuson-Stevens Fishery Conservation and Management Act is:

“Fish which are harvested in a fishery, but which are not sold or kept for personal use, and includes economic discards and regulatory discards. Such term does not include fish released alive under a recreational catch and release fishery management program.”

In other words, just because a fish is caught that is not targeted does not make it bycatch, as long as it is landed and sold. It’s also important to remember that “discards” does not necessarily mean the fish was released dead. 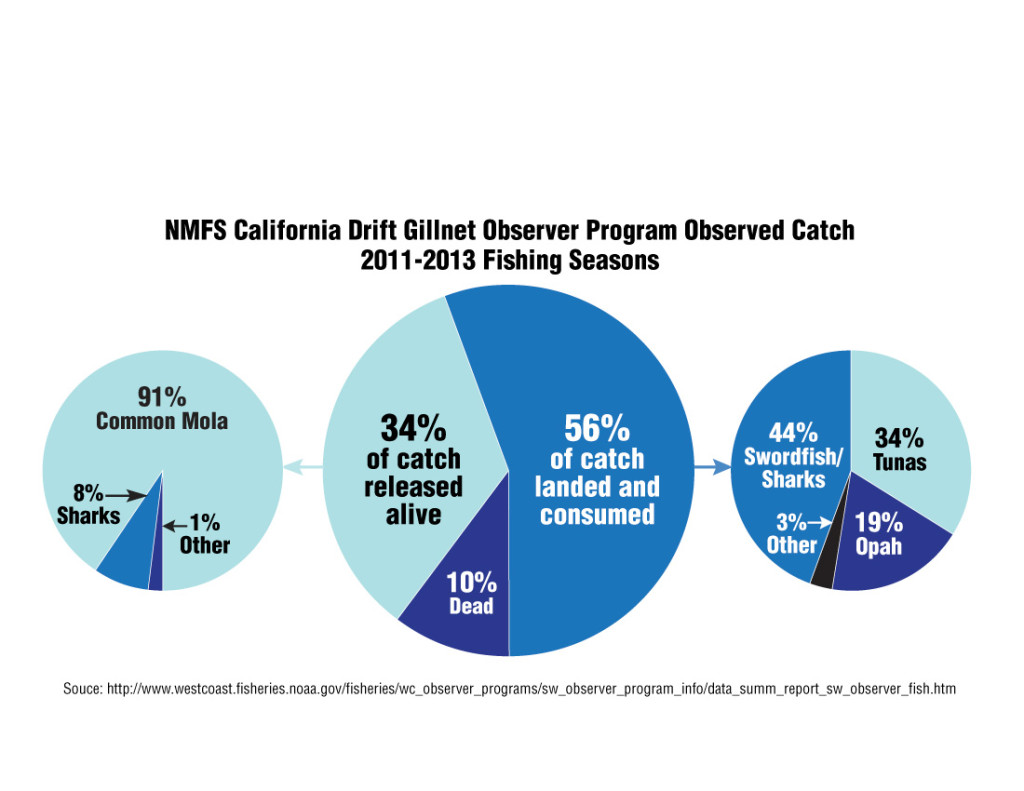 Oceana falsely claimed that 63% of the total CA DGN catch are discarded at sea, dead. The truth is that 56% of the DGN catch is landed and sold to local markets. The remaining 44% is discarded at sea, but studies show that 77% of this bycatch is released alive. Another point that resonated with Assembly Members was the fact that replacing responsibly caught local swordfish with imported swordfish from less-responsible foreign fisheries would only create a transfer effect that would increase the total amount of bycatch worldwide.

Economics also played a role in influencing the Assembly Members. We shared a new study with them that was recently performed my NMFS that estimates the passage of AB 2019 could result in a potential employment loss of up to 136 full-time jobs with a total economic loss of about $14.513 million.

Our ability to defeat AB 2019 marks a very important moment for U.S. fisheries that are under attack by very powerful environmental groups that have a lot of money. This was a major victory for the underdogs, the good guys, and the ones who don’t think they stand a chance to stand up and fight for what’s right against the big environmental groups. This gives me hope for the future, as I’m sure this will not be our last fight. 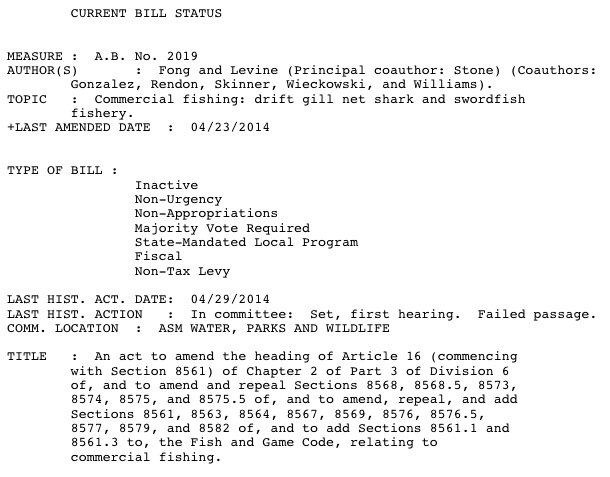