I’ll start with a quick note that the Magnuson-Stevens Act does not consider marine mammal entanglements to be “bycatch,” a term which is restricted in the statute to describe fish that are caught and discarded at sea. Instead, marine mammal entanglements incidental to commercial fishing are defined as “takes” which are authorized and permitted in accordance with the Marine Mammal Protection Act. This should explain my heavy use of quotation marks.

The California shark and swordfish drift gillnet (DGN) fishery is one example of a fishery that occasionally entangles marine mammals, but fortunately these unwanted interactions are rare events. Since 1990, the DGN fishery has been required to carry on-board observers to record catch data and over the last 25 years observer coverage levels have hovered around 25%. So how can you accurately estimate annual “bycatch” totals without observing 100% of the trips?

Traditionally, annual “bycatch” totals in the DGN fishery have been generated (or extrapolated) from available observer data using ratio estimates, i.e., 2 sperm whale entanglements were observed in the DGN fishery during the 2010 fishing season with 12% observer coverage, so one could estimate that 16.7 sperm whales were caught that year. Traditional ratio estimates seem pretty fair and straightforward, so what’s the problem? 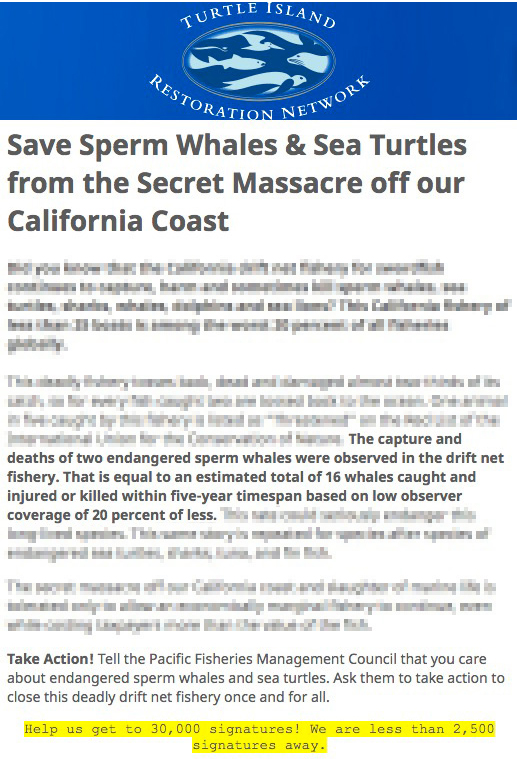 One gigantic problem with traditional ratio estimates is that they often suffer from systematic bias (under-and overestimation of “bycatch”). For example, the most recent sperm whale interaction observed in the DGN fishery prior to the 2 sperm whale interactions in 2010 was back in 1999. Given the historical rarity of sperm whale interactions in the DGN fishery, one could argue that assuming 16.7 sperm whales were actually caught in 2010 while relying solely on traditional data extrapolation is a prime example of overestimating “bycatch.” Furthermore, this particular sperm whale event in 2010 resulted in a temporary DGN fishery area closure and triggered a series of several other reactions and actions from scientists, fisheries managers and NGOs. Bad data is bad for everybody, especially when dealing with endangered species. To this point, Martin et al. (2015) highlights many problems with the estimation and prediction of rare event “bycatch” events combined with low observer coverage in the DGN fishery.

But the good news is that there is a new alternative to annual ratio estimates that result in more stable interannual estimates with better precision called regression tree estimates. But don’t let the negative-sounding name fool you because regression tree estimates are actually very progressive in terms of rethinking the old, traditional, dopey and inaccurate ratio estimator and replacing it with a more probabilistic, model-based estimation approach that moderates inter-annual volatility in “bycatch” estimates. So by all means I urge you to please read, enjoy and share this new paper (the file is over 7mb so give it some time to load):
Carretta, J.V., J.E. Moore, and K.A. Forney. 2017. Regression tree and ratio estimates of marine mammal, sea turtle, and seabird bycatch in the California drift gillnet fishery: 1990-2015. NOAA Technical Memorandum, NOAA-TM-NMFS-SWFSC-568.83p. 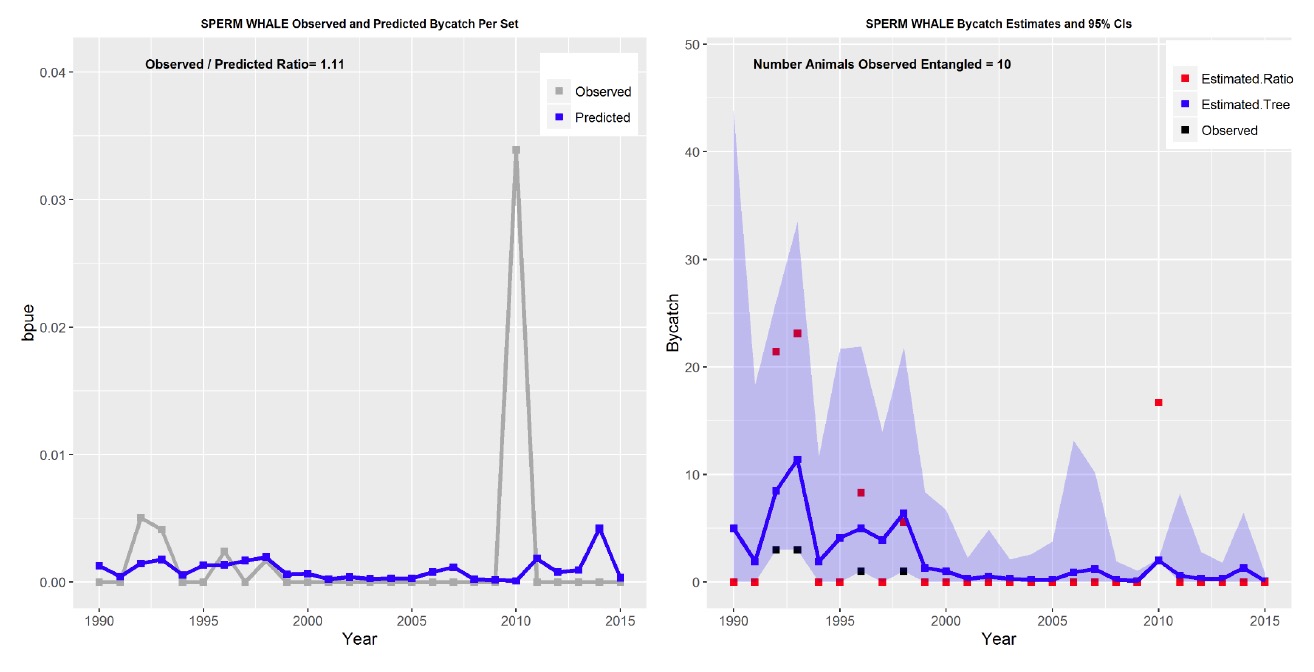 In the paper you will notice some large differences between annual “bycatch” estimates using regression trees and ratio estimators. For example, the regression tree estimate of sperm whale “bycatch” for the 2010 DGN fishing season was 2.0 whales (2 observed + zero estimated in 433 unobserved sets) compared to a traditional ratio estimate of 16.7 whales. According to the study, given the observed sperm whale “bycatch” rate in the DGN fishery over 26 years (~ 1 animal for every 1,000 sets), it is highly unlikely that observed + unobserved “bycatch” in 2010 was ~ 17 whales. Instead, the study suggests that it is more likely that there were two entanglements, both of which happened to be observed. Like I mentioned before, this serves as a prime example of how ratio estimates can overestimate “bycatch”, but what about underestimations?

According to the study, another problem with traditional annual ratio estimates is that when zero “bycatch” is observed, resulting “bycatch” estimates are zero (with no variance estimate), even if undetected “bycatch” occurs. For example, zero sperm whale entanglements were observed in 648 sets in the first two years of the DGN observer program (1990-1991), when total fishing effort was estimated at over 9,000 sets. Resulting annual ratio estimates of sperm whale “bycatch” in 1990-1991 were zero, which one could be considered an underestimate given the observed long-term “bycatch” rate on 1 whale in every 1,000 sets. In contrast, regression tree “bycatch” estimates for 1990-1991 are approximately 7 sperm whales, which is much more realistic considering the amount of fishing effort.

Progression is good and I can’t stress enough how important it is to have accurate data, which is why I am delighted to share this new study which clearly serves as an example of #OceanOptimism.